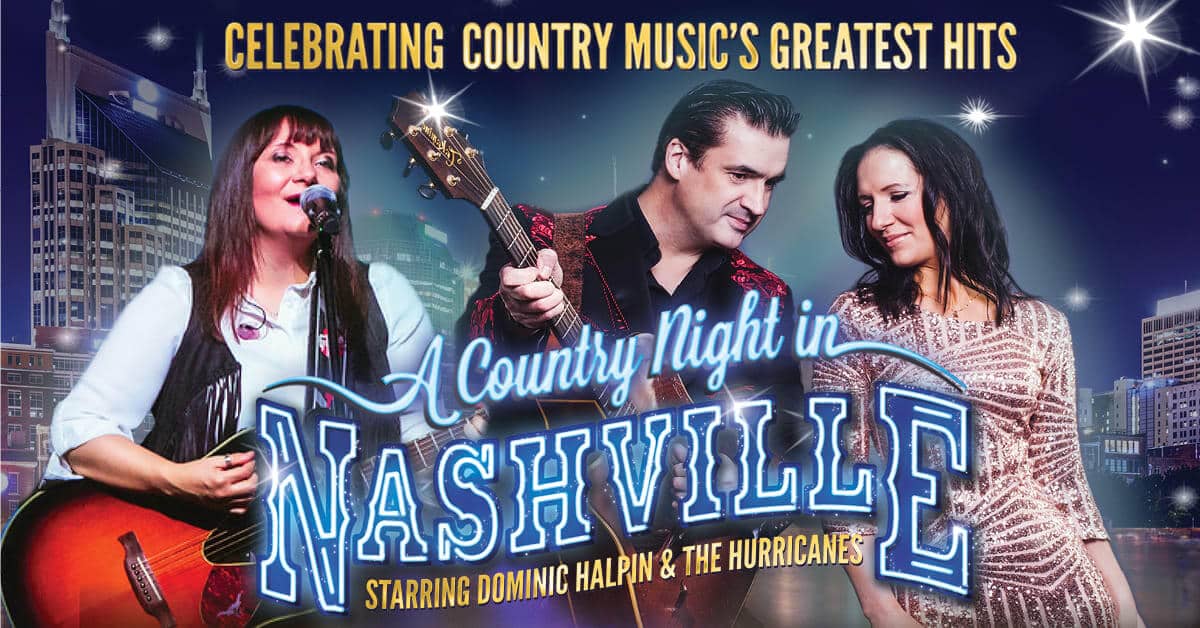 A Country Night in Nashville – 4,000 Miles in the Making

The documentary features musician Dominic Halpin’s remarkable journey from wedding singer to the West End stage. Dominic, from Manchester, has enjoyed a good career spanning more than 20 years, singing on cruise ships, in bars and at weddings. He has also written music that has been used on films in Russia and on the BBC.

But his life changed when he met Handshake founder Stuart Littlewood. Stuart saw Dominic performing at a bar in Leeds and went on to build a band, The Hurricanes, around him and take Country music mainstream via a phenomenal sell-out UK theatre tour. The documentary charts the success of the show and the journey of a musician in the industry. It is a must watch for Country music fans the world over.

“As soon as I saw Dominic performing, I knew he could be big,” said Stuart.

“We got talking and it turned out we both shared a love for Country music, so we put a band together and created a Country show for UK theatre land. It resulted in a sell-out tour, but it was cut short by COVID-19. So, during lockdown we created a documentary on the whole journey. Dominic had lots of amazing footage on video that he had recorded throughout his career and we shot some additional pieces.

“It is a fascinating story and the documentary has been produced to a very high standard, that was important to us and we are proud of it.”

Handshake Ltd could have approached a major TV channel with the documentary and pitched for a slot on a prime station.

But Handshake Ltd opted for TicketCo Media Services to provide the company with complete editorial and production control of the documentary.

“We could have approached BBC 4, C5 or Netflix, but we decided to take a different route,” said Stuart. “Because Dominic is not a famous name, we did not believe a major broadcaster would be interested. But also, more importantly there would have been a delay in going live, and they would have wanted editorial control of the content.”

“By using TicketCo Media Services we can broadcast the documentary how we want it, when we want to and hit the audience we want to reach. It is a perfect solution.”

Monetise documentary with own TV Channel

By using TicketCo Media Services Handshake have created their own branded platform to broadcast the documentary at a fixed time and sell pay-per-view tickets, and then make it available via our video on demand function. All via one hybrid system.

“It is like having our own TV channel,” said Stuart.

“It is staggering really how quickly this has been created. It means we can broadcast the documentary to a global audience. If we had gone to the BBC or C5 we would have been restricted to a UK audience. But this way we can go to different countries where there is a strong interest in the American Country music genre. There are no barriers.”

Taking control of your digital content and broadcasting it online creates greater opportunity and enables you to reach your audience directly.

Stuart said: “We can market the documentary to everyone who has seen the show and then we can market to anyone who enjoys American Country music. It connects people directly, which is fantastic.”

Dominic added: “The last few months have really opened my eyes to the power of the internet. To be able to broadcast our documentary ourselves and direct to our audience is amazing. Nowadays people can access what they are interested in and watch content that is relevant and accessible, with being at the mercy of a predetermined TV schedule.”

By streaming the documentary to multiple countries Handshake can then assess if there is new demand for the show in untapped territories.

“We don’t know how the documentary will be received,” said Stuart. “It will be interesting to see how it goes and by sharing it with different countries we can reach new people. Then we can assess where we are in the market and whether there are more people who would like to see us perform when we can tour again.”

Dominic said: “The opportunity to share the story of someone making it in the music industry without being a big brand and to reach our audience is amazing. It will be interesting to see how this goes, as it is new to us.”

At TicketCo we have built our business on providing an easy to use digital platform for event organisers, artists, and venues to sell tickets and market their events. We have always been at the forefront of developing our own technology to adapt and provide a service and platform that is relevant in the digital age.

When lockdown hit the industry the team at TicketCo soon realised it was an opportunity and the company invested in R&D to develop and launch TicketCo Media Services, a new pay per view live streaming and video on demand service. It is combined with our ticketing platform so organisers and artists can monetise digital content and events.